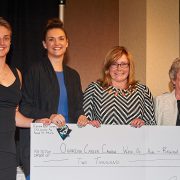 Friday, September 22nd marked the Regina Riot’s annual Awards Banquet. Held at the Ramada Hotel after a well-earned summer break, it was a night for the team to get together and celebrate their second championship victory in team history.

The evening began with the presentation of a $2,000 cheque from the Regina Riot to their partners the Ovarian Cancer Society. The partnership between these two groups has grown significantly over the past few years, with members from both sides volunteering at each other’s events. This culminates each season with the Riot’s annual Teal Game, at which portions of game day event profits are donated to the OCC. It’s a partnership that both sides look forward to continuing for years to come.

Next up was the Paige Mitchell Memorial Scholarship, which was being handed out for the first time this year. Paige Mitchell is a former Riot player who passed away suddenly in the fall of 2016. Members of Paige’s family were on-hand to award the scholarship, which goes to a Riot player who is going to school to become a tradesperson. Baillie Jo Koszman, a third year defensive lineman for the Riot, was the lucky recipient.

Players took the stage throughout the evening to pay tribute to their positional coaches. These presentations ranged the spectrum from short speeches to elaborate game shows, but it was obvious to all in attendance the great love and appreciation the team has for their coaching staff.

2017 Championship Rings were also handed out to members of the Riot that evening. Passed out by General Manager Alicia Dorwart and Board of Directors President Clarke Westby, the rings are customized to each individual player, leaving them each with their own unique memory of an incredible season.

Perhaps the most anticipated portion of the evening, coaches took the stage one at a time to award players for the hard work and passion they showed during 2017 season. Many kind words were spoken, and in the end, Team MVP was handed out to running back Carmen Agar for her contributions on the field this year.

A full list of award winners can be found below: