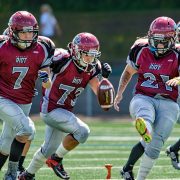 The Regina Riot are hoping that the “look good, feel good, play good” mantra holds true this year. That’s because thanks to a generous donation from sponsor Banbury Plumbing & Heating, the Regina Riot will be getting new jerseys for the first time in team history.

The Riot’s current jerseys have been worn since the team’s inaugural season in 2011, and the update is long overdue. After six years, many of the current jerseys are worse for wear. Banbury Plumbing and Heating, a sponsor of the Riot since day 1, had noticed this and were eager to jump on board to help cover the cost of the new threads.

While a new look has not been finalized yet, don’t expect any major changes to the traditional red, silver & black colour scheme. The jerseys will be worn for the first time during the Riot’s regular season home opener against the Manitoa Fearless on May 7th.