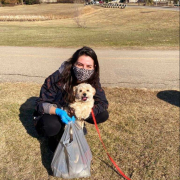 The Regina Riot’s players and coaches are familiar with the concept of cleaning up. But usually, they do their cleaning up on the football field. In 2021, that sentiment extends to the streets of Regina as well!

More than 20 members of the team, along with several (two-legged and four-legged) family members took to the streets on April 21, to help clean up their respective neighbourhoods.

“As a group, we were looking for ways to stay active in the community during the pandemic,” says Riot head coach Kris Hadesbeck. “Even though our season remains on hold, that doesn’t mean our commitment to our community weakens. This is the first time we’ve tried a community garbage pick up. But, based on the results, I think it’s safe to say it won’t be the last time!”